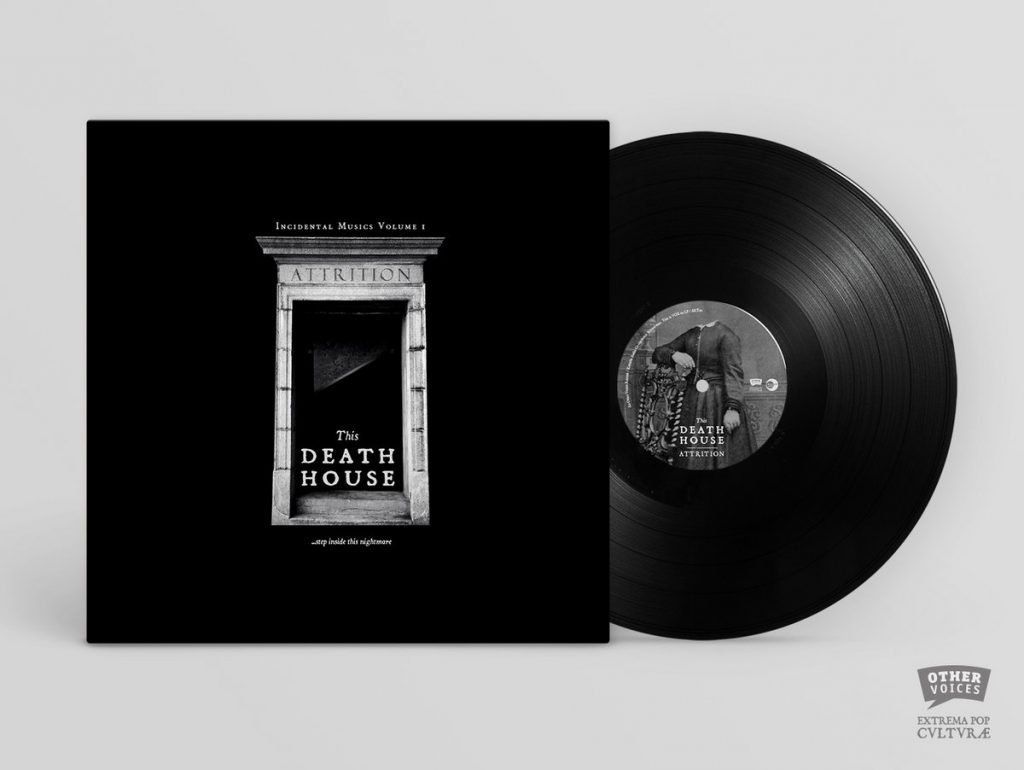 1982’s “This Death House” soundtrack – Remastered and re-released on vinyl and download for our 40th anniversary year!
Includes a free poster inside every vinyl…

The legendary Attrition began their musical career back in 1980. In two years time they would go on and release their masterful debut “Death House”, an album that conjures the most macabre of Attrition’s elements. Allegedly influenced by classic zombie films, “Death House” lends truth to that rumor by delivering forty six minutes of blackened paranoia inducing ambiance. Split into two sprawling pieces, “Death House” conjures the grim, unsettling atmospheres of such films like “The Last Man On Earth” and the original “Night of the Living Dead” and portrays them into musical form.

The album is oftentimes uncomfortable to listen to, much like when you watch that scene in “Night of the Living Dead” where Judy and Tom’s pickup truck explodes for the first time. The ghastly scene of watching Tom and Judy’s corpses get eaten by zombies was the turning point in the film. How that scene made you feel queasy, well, Attriton do that for the entirety of “Death House”. Attrition’s actual musical approach is pretty minimal. They use light percussion and synthesizers to comprise their sound. The walls of synthesizer swell and bellow with agitation, twisting and morphing into all kinds of unfettered sounds while getting progressively both louder and softer. Tension is always high, as is dread and psychosis. In “The Dead of Night” you are greeted by harrowing synth effects that sound like a ambulance siren. It picks up in strength before it ominously fades away, conjuring a thought of some speeding ambulance that never quite made it to it’s destination. Instead, the ambulance lies turned over on it’s side, all occupants inside the vehicle lying motionless with the cracked windshield stained red and a vast, slow moving horde silently moving in to corner the tragic victims. Wind samples and bleeping computer effects are also used magnificently, with the wind providing a naturalistic sense of horror while the computer projects something more sinister.

The album essentially composes the soundtrack to the perfect horror film as it has all the trademark elements of one. High-strung motion, unwavering tension and absolute conviction define this record but it comes as no surprise to me that a legendary band like Attrition would immediately come out the gate swinging with a masterpiece. The synthesizers and percussion are used to such a stunning effect on “Death House” that I highly recommend this album to everyone who can appreciate genuine, dark music.