“Forever there will be the speculation that the exploration of darkness as a beautiful place will lessen our fear of it all, ease the pain a little…”
Lilly Novak. from The Hand that feeds review. 2000

UK shows in Weston super mare and London… Play the Dark Waters festival in Nottingham in May…
a 2 disc vinyl set – Demonstro 1981 – 86… is released on german label Vinyl on Demand.. a collection of the rarest early material… Return to Canada for 3 shows in June… then Pisa, Italy… then the first trip to Brazil for the Woodgothic festival in the mystical mountain town of Sao Thome das Letras… then play our debut in Finland at the 11th Lumous festival..along with Klute and Anne Marie Hurst…
Alexys is asked to leave the band after her untoward behaviour….
Russian label Other Voices releases The truth in dark corners – a live collection from the ATTRITION 1985 tour of Holland…
Martin finally opens the doors of his studio the Cage… starts producing albums for other bands… Canada’s Dark Digital in September…he adds a guest vocal…. 3 Cold men album in October…
Kerri joins us as special guest for the next show in Belgium in September… organised by Der Klinke… ATTRITION feature in their promo video for their song “The Game”, filmed in Ostend that same weekend…Martin lends his vocals to the recording….Play Turin in October… Martin is re-united with Tylean onstage at her solo show in Manchester UK… they perform a number of Attrition favourites….Martin and Kerri start work on composing the film score for upcoming US horror film G.H.O.S.T for Mutantville productions….

As Martin is finishing recordings for the upcoming ATTRITION album “the unraveller of angels” he is taking on more and more production and mastering work at the Cage… upgraded and moved to new premises in january… Producing albums for Scene Noir and Contaminated Intelligence in the spring … Strange Walla and Acclimate follow…mastering for Psychic TV, Steven Severin, Ed Kaspel, Merzbow, Anni Hogan with Nick Cave and Marc Almond and many more…. Martin ressurects old project Engram with friend John Costello… starts work on a full length album… also joins Justin Mitchell’s Satori on live synths…play Dresden in October
Invocation : The soundtrack score for G.H.O.S.T. is completed and released on Russian label Infinite Fog in time for Halloween…. 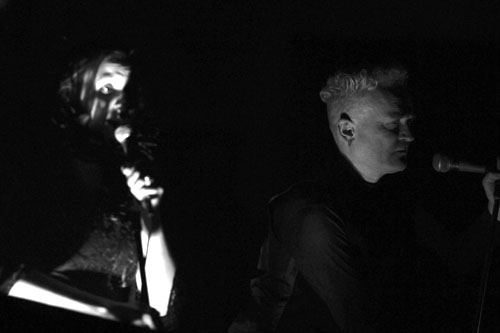 Preceded by Narcissist, ATTRITION’s first download only ep in march – the new album, The Unraveller of Angels is released in april on CD…May on vinyl…. and the band begins another series of shows around the world… starting in Athens, Greece , then the Reproduktion festival at the Roundhouse in London… then set off on their third and biggest tour of eastern Canada late in May… Martin and Kerri perform Invocation live at the Tower Transmissions festival in Dresden in September…and the band play a show in Koln, Germany with Chameleons Vox in November… Start a series of digital only releases : Live at The Belgrade: the first ever show from December 1980…. The Cage goes from strength to strength and Martin begins a series of live in the studio sessions, in the spirit of John Peel… Rossetti’s Compass in November… TyLean in December… ENGRAM…the side project Martin started with John Costello in 1996, release their debut ep.. “What Am I” at the end of the year…

Kick off a show with The Arch in Belgium in January then release the second in the digital series with Live at The General Wolfe, 1983…. Demonstro is released with revised tracklisting on CD for the first time…followed by another digital release in Live at The General Wolfe -1983. Martin guests on live synths with doom metal act My Silent Wake in Birmingham in March… 30 year anniversary of the first ever ATTRITION single – Monkey in a bin – remastered from the original 4 track tapes and reissued on CD…. the One Horse Rider season starts with a limited 7″ lathe cut vinyl edition of a remix by Density of State and a 6 track CD of remixes…Play Belgium and Holland (with The March Violets) in April…in May, Live at The Pushing against the Wire festival. 1992 is the third in the digital release series… release Narcisisist vs One Horse Rider 26 track remix album as digital only… Play The darkulture festival in Manchester in September with Frozen Autumn and more…. In December release “In Dark Dreams : 1980 – 2015” a 30 track retrospective, as download only….

The 1982 song “Birthrite” appears on “Silhouettes and Statues” : the Cherry Red records 5 CD box set of the origins of “Goth” (alongside Bauhaus/joy Division/The Cure/Birthday Party/PIL/Adam and the Ants/ The Damed/ Cocteau Twins etc etc…. The Attrition of Reason Redux is released, a remixed/remastered 2CD set including the debut album, bonus tracks and early compilation tracks… Played a lot more shows around the world… UK, Belgium, France , Spain, Hungary, East and West coast of Canada and a first show in Hawaii in September… Released a live ep from the Toronto show… “A girl called harmony appears on the”Alternative Sounds” CD collection of Coventry area music that martin compiles, the name harking back to his early 80’s fanzine.
Recording the upcoming album…

Start the year with a first show in Rome in February…get snowed in and return home 2 days late…
First ever tour of new Zealand follows in may with shows in Wellington and Auckland…released LIve in Wellington, New Zealand as a free download ep, a track also features on Cage 25… the 6th annual collection of work Martin is doing in his studio…Play York Black Rose all-dayer in June. Undertake a series of photo shoots towards the upcoming new album at the old derelict Coventry newspaper buldings. Appear on Prophecy & Progress, a vinyl collection of early UK electronics with a the 2006 remaster of Beast of Burden from the debut album (1984).
August sees the first ever trip to Transylvania where ATTRITION play a live redition of the Invocation horror film score at the Bala festival…
The ENGRAM side project begun with John Costello in 1996 finally complete the debut album “Das Kapital”…released October 2018…

The sixth trip to Canada in March on the “Ides of March” tour with Indarra, Rational Youth, Vancorvid and Subterranea joining on some of the dates.. Release a live recording of the Invocation soundtrack performed live in Toronto…Play London’s 100 Club with old friends Siglo XX at the end of March… Play Birmingham after many years…with Psydoll from Tokyo… Play “In the Black Midwinter” fest in Sheffield in December and end the year playing 4 shows in Tokyo in December…

The Great Derailer – the new single released for Brexit day… January 31st….With a video shot in Coventry by Antony Weir. The B side of the single , The Pillar, was also made into a video by Martin. Then Covid happened, and like for everyone else, all the tour plans for 2020, including the first full South American tour were cancelled or postponed… The Coventry City of |Culture commissioned a new tracks, The Voice of Truth, for their “Lock down sessions” collection on youtube. Martin also started working on making videos, and starting the immense task of going through all the Attrition archive material for the upcoming life story and book…also donating mastering services in The Cage for a massive collection of bands with profits benefitting the NHS here in the UK

January sees a limited lathe cut single with a new edits of “The Mouthless Dead c/w The Bone Factory out on Germany’s La Bois Records. The Alibi, the second single from the upcoming album, The Black Maria… is released digitally in June, with remixes, and a first full video production by Martin. In September, as the world started opening up again, Attrition played their first show in a lonbg while at The Tin in their hometown of Coventry, performing “Death House Variations” for the first time… with the original 1982 line up that recorded the dark ambient album… In November they played it again, this time in Whitby, UK 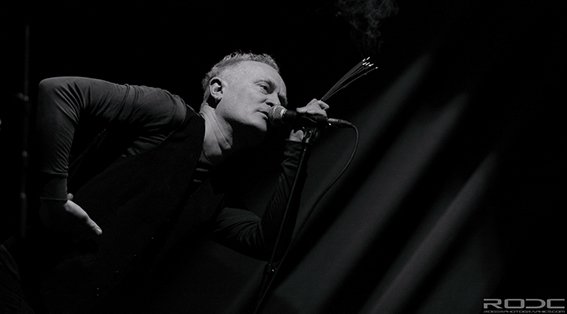 “Attrition have always been a nexus of industrial fury, gothic drama, ambient structural finesse and classical chamber orchestrations. Stunning in scope, character and intellect, Martin Bowes has been a paragon of true creative prowess, holding in two hands the past and future of music, and smashing them together with a calculated and charismatic menace. Bowes builds his dark industrial music with all the compassion and attention to detail of a classical musician…”